DUMBO, (short for Down Under the Manhattan Bridge Overpass) is a once-industrial neighborhood turned popular, artsy hot spot.

Today Dumbo is the Brooklyn’s most expensive neighborhood, as well as New York City’s fourth-richest community overall; this is owing in part to its large concentration of technology startups, its close proximity to Manhattan, and its large number of former industrial buildings that have been converted into spacious luxury residential lofts.

In the 1890s, the western portion of the actual DUMBO neighborhood was known as Fulton Landing, after the ferry stop that connected it to Manhattan before the Brooklyn Bridge opened.
At that time, the neighborhood saw a rise of factories, warehouses, and dock storehouses.

In the late 19th century, New York’s population growth seemed endless; the city needed bridges for the connection between Manhattan and Brooklyn, and in 1883 opened the Brooklyn Bridge to traffic, while the Manhattan Bridge will be operational in 1909.

For efficient logistics between Manhattan and Brooklyn, the “Jay Street Connecting Railroad” was operational in Dumbo for more than 50 years, from 1906 to 1957

The Jay Street Connecting Railroad ran from rail yards beneath the Manhattan and Brooklyn Bridges to buildings near the waterfront in Dumbo and Vinegar Hill. At the height of operations, it had spurs into several buildings, a car float bridge on Bridge Street, and a yard with capacity of 120 cars. The tracks were abandoned in 1959, though the railroad’s tracks are still visible on streets in Dumbo. 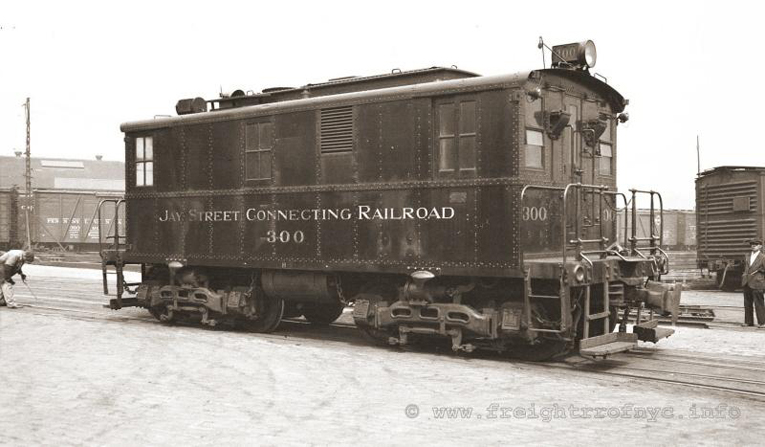 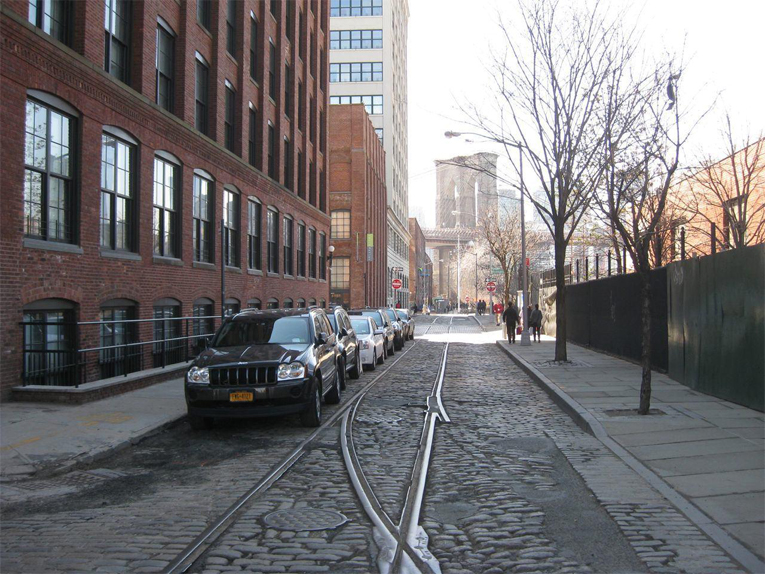 With the deindustrialization of New York City, Dumbo began to become primarily residential; artists and other young homesteaders seeking relatively large and inexpensive loft apartment spaces for studios and homes began moving there in the late 1970s. The acronym “Dumbo” arose in 1978, when new residents coined it in the belief such an unattractive name would help deter developers.

But it was at the end of the 90’s, more precisely in 1998, that we began to talk about DUMBO as the new Tribeca and SoHo, thanks to an article in the New York Times by David W. Dunlap, “SoHo, TriBeCa And Now Dumbo?” Read the article here: https://www.nytimes.com/1998/10/25/realestate/soho-tribeca-and-now-dumbo.html 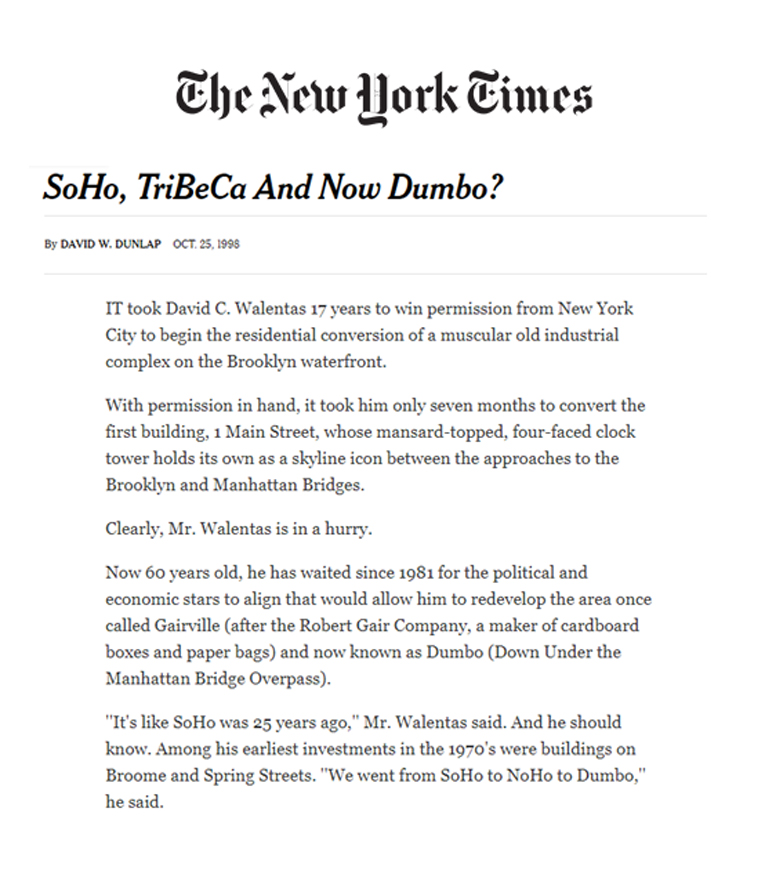 According to the Landmarks Preservation Commission, the Dumbo area was “essential to Brooklyn’s rise as a major American industrial center and was the home of some of the most important industrial firms in the late nineteenth and early twentieth century America including Arbuckle Brothers (coffee and sugar), J. W. Masury & Son (paint), Robert Gair (paper boxes), E. W. Bliss (machinery), and Brillo (steel wool). The buildings in the district reflect the extraordinary diversity of Brooklyn’s industrial development, with manufactured and processed goods including coffee, tea, sugar, machinery, paint, varnish, paper boxes, shoes, soap, ale, and steel wool. By the early twentieth century, Brooklyn was the fourth largest manufacturing center in the entire country and a significant portion of this manufacturing was done in DUMBO.” 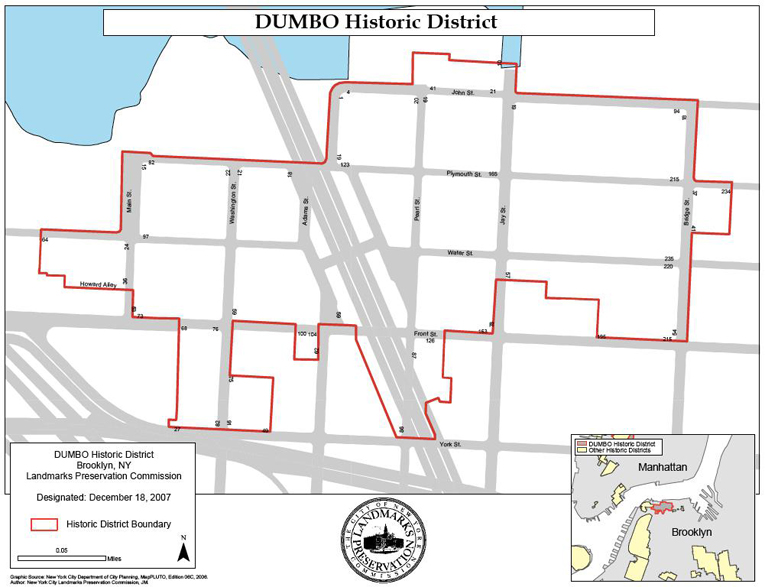 Today Dumbo is a district that manages its growth by providing green spaces such as new waterfront parks, and tons of cultural and artistic events. 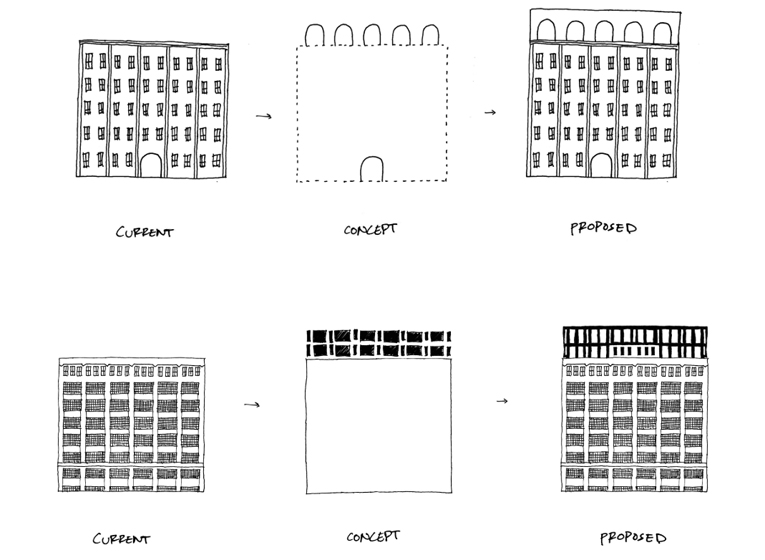 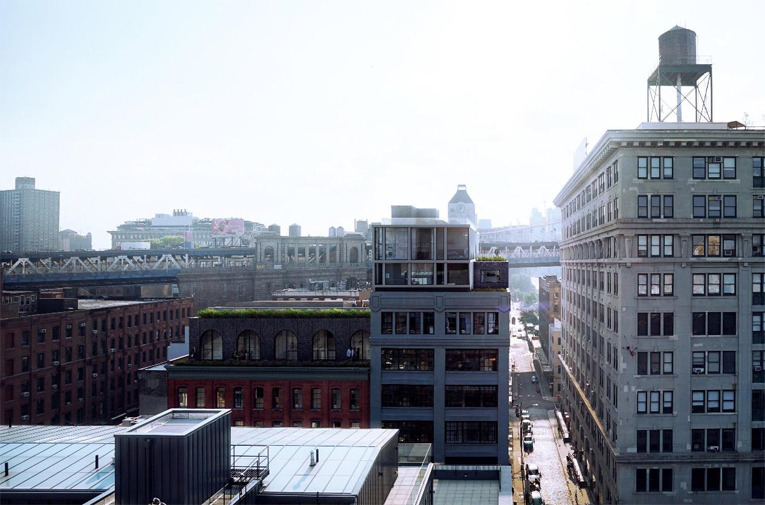 The Landmarks and Preservation Committee unanimously approved proposed work for 168 Plymouth into contemporary lofts with new penthouse additions.
Today the internal demolition works have begun, thus revealing the ancient bricks and wooden structures. (see picture below).
At the end of the work, in 2020, these ancient spaces, which housed factories and warehouses, will be transformed into 46 beautiful contemporary lofts. 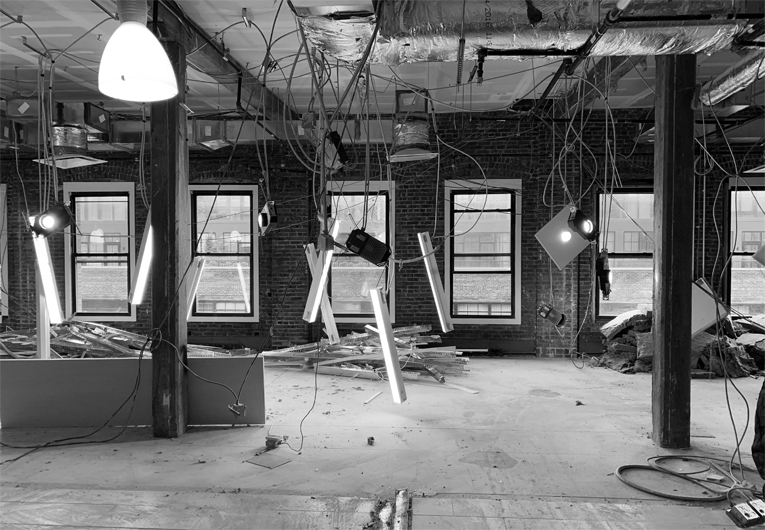 RiFRA will supply 46 kitchens and 138 bathroom compositions, which will furnish the lofts of the project.

The 168 Plymouth kitchens are presented with an imposing island, inspired by the KUBE collection.

The 45° workings are present on the top, on the sides and on the doors of the island, which has no visible edges.

The island’s wood is a special, thick, brushed oak.

Below them, the worktop is illuminated with LEDs, while the columns and bases of the wall-mounted kitchen are lacquered in pure opaque white. 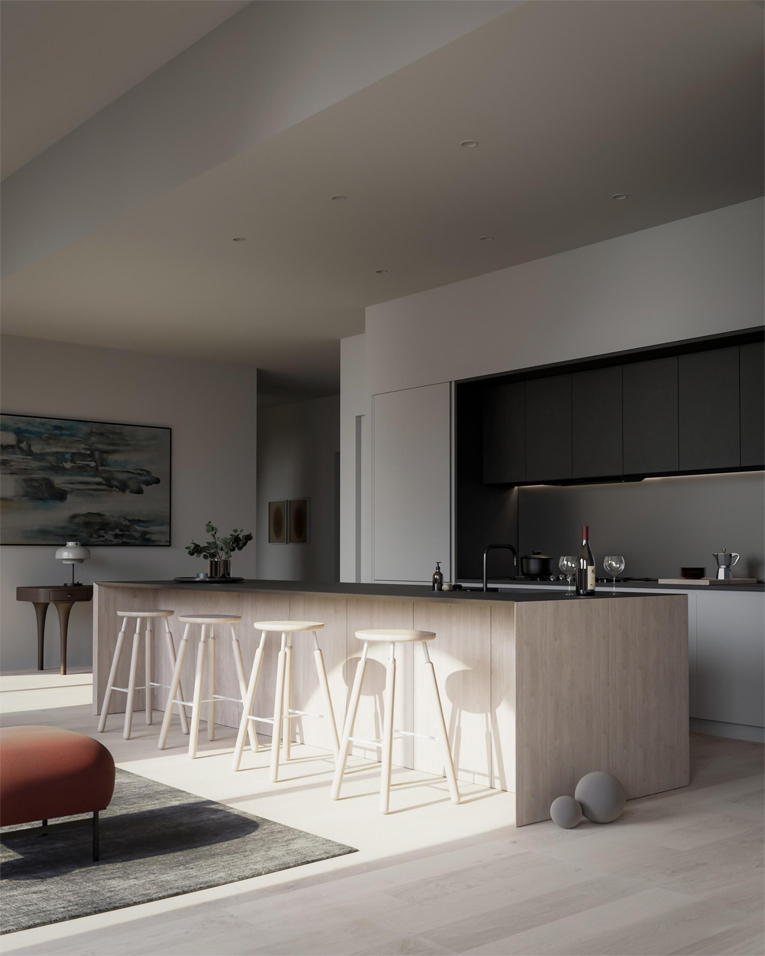 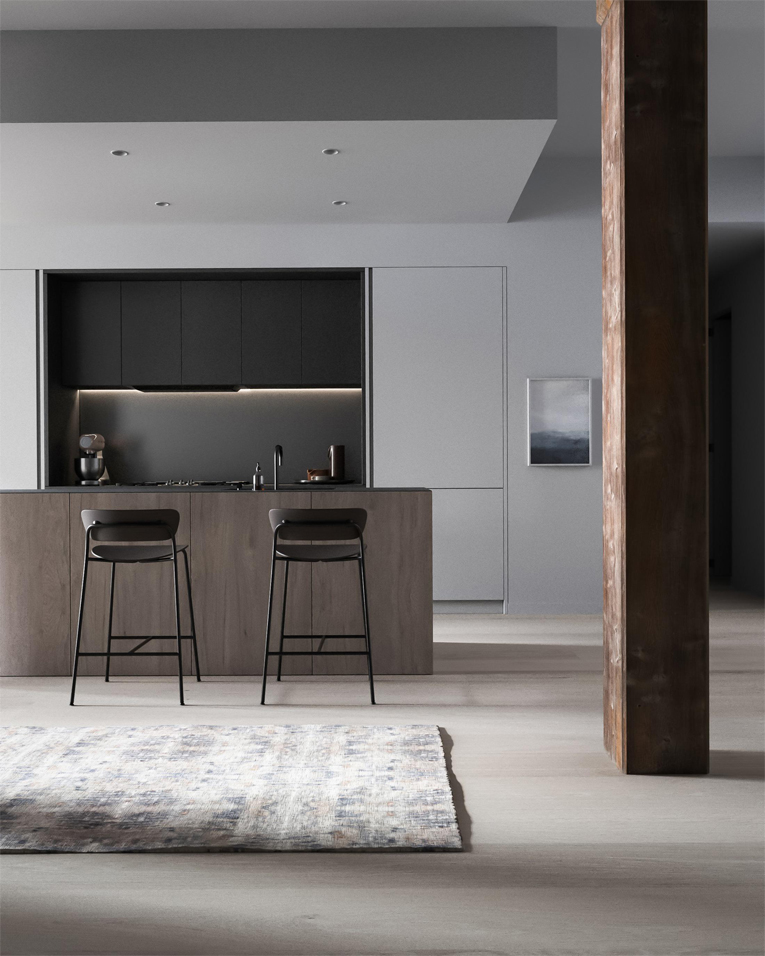 The bathroom furniture for the master bath, is of the same finish as the kitchen island, special oak, the other furniture is finished in lacquered or oak.

The washbasins integrated in the top are supplied in Solid Surface

Production
All products are designed and manufactured in RiFRA, in our factory located 20 km north of Milan.
For the delivery scheduled in 2020, we will also take care of transport to the Job Site, including customs procedures and the payment of taxes and duties.

Acknowledgements
We would like to thank Alloy Development LLC for their trust in RiFRA and we are very proud to be part of such a prestigious project.

Two other projects are in Brooklyn, while the largest in terms of units is a tower in Manhattan (Financial District).

Need a quotation?
If you are a Real Estate developer and would like a quote for your real estate project, please contact us at shop@rifra.com

Join more than 90,000 people, you'll get valuable content and you will be informed and followed by our suggestions and our events 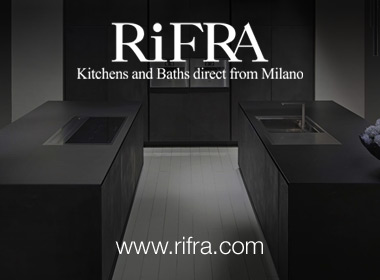